The boiling hatred of these left wing terrorists is on full display, as “Dirty Daryl”, glorified in a Hollywood movie called “Skin” threatens a voluntaryist community action.

This story out of Baltimore hit close to home for me. I am a frequent target of Marxists hiding under the guise of anti-racists, and Jenkins himself has harassed me in the past.

As President of the Florida American Guard I recently launched a similar initiative to do similar cleanups and other acts of community service statewide.

A few right wing folks, led by openly gay right winger Scott Presler, decided to do something for a blighted area in Baltimore and posted about it on social media. They hoped to inspire others to voluntary acts of service in their communities. 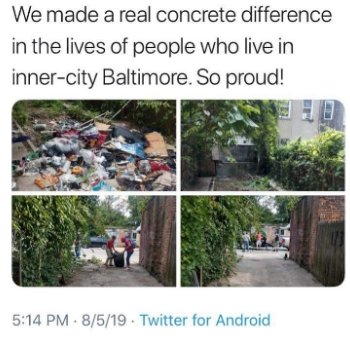 Daryl Jenkins, a leading race pimp and hate-monger on the east coast, began with a subtle threat, announcing their location to his gang of left-wing terrorists.

The men politely responded and invited him to join them, rather than continue being adversarial. What better way to heal America’s old wounds than by working together to beautify our communities together. This is one of the main motivations behind Florida’s #AGjustdidit initiative.

In a sad, but typical response, Dirty Daryl came back with a more overt threat.

I can appreciate the honesty of Jenkins. He admits his lack of concern for neighboring communities or the lives of Baltimore’s poor. The fact Hollywood movies cast him in anything other than a villan role is sad, but not surprising.

If ANTIFA is going to attack us for voluntaryism and efforts to make our local cities nicer, so be it. I cannot think of anything more worthy of defending.

It speaks volumes about their real motivations to anyone who was leaving any doubts on the fence.