Introduction:
LPF Director At-Large Chris Rose has been complaining about his disagreements with the Chair for months.
I repeatedly advised him to either organize his own activities, propose changes via the process outlined in their governing documents, or find someone to run against him at the next officer elections, even himself.
A pattern developed with events ending in bitch sessions over petty beefs with his home affiliate. He wanted me to force the Chair to do bend to Rose’s will, and would not take no for answer even after I explained that such intervention could actually subject me to disciplinary action, and I refused to interfere, other than to offer the above advice.
He became upset with me, because in many of the discussions I agreed with decisions made by the Alachua Chair.
The LPF is structured like we want government. Local home rule in all possible cases. As a Regional Representative, I do not “outrank” an affiliate Chair. In fact, I have to ask their permission to initiate political action in the affiliated counties, and the state party is specifically barred from interfering with affiliate autonomy in the LPF Bylaws, Article I, Sections 1,3, for reference.
He hatched a plan to play parliamentary games at the next meeting, and posted a ton of motions to the visitor post section of the affiliate Facebook page a couple days prior. Bear in mind as you listen, the man has no standing introduce or vote on motions. The Chair graciously allows discussion anyway, despite the number of motions being what you typically see at an Annual Business Meeting of the state party.
They include complete replacement of the entire Constitution and creating 5 committees needing at least 15 members in an affiliate with 7-15 members attending on average including a 4 person Executive Committee.
Adding to the absurdity, he is not even there when they are brought up. The Chair brings the motions up later anyways when Rose shows up late, which is an extreme professional courtesy.
Below is commentary with appropriate time stamps with background stories and corrections of some of the things that were said.

The meeting opens with talk of the motions and the Chair compliments Rose on an idea he had. Redacted is talk afterwards with some new potential members and a new candidate who I cannot imagine were very impressed by what transpired next.

3:45 –
This is absolutely incorrect. The LPF only allows EC members to bring motions or to vote on them.
Very few affiliates allow member votes, mostly large well organized affiliates.
Democracy being the road to Socialism, most Libertarians prefer the ruke of law and the checks and balances of a representative form of governance to the chaos and mob rule of Democracy. The potential for disruption in an affiliate like Alachua, site of the University of Florida, is enormous.
This is compounded by the fact the criteria Rose proposed would allow non LPF registered voters who do not live in the county, but merely work or go to school there, to vote on business.
In addition, his proposed rules would allow NPA voters to be elected to the EC. This is against the LPF rules, and would force disaffiliation.
7:45 –
1) There was no official agenda, and the affiliate does not run meetings under strict “Roberts Rules”, as most do not.
My affiliate allows us to invoke them when necessary. We have never needed to.
Alachua has never either.
2) There was no vote to approve any agenda.
3) You can table or postpone any motion, and motions voted down can be brought up again as long as the mover votes no. He knows nothing about the rules he is trying to shove down everyone’s throat.
4) The Chair already brought up the items and he was not even present.
5) Rose has no standing under current bylaws, the Chair is being gracious to even hear him out, and he is making up rules and threatening to filibuster.
11:50 –
The Secretary does not define the agenda. ACLP Bylaws allow EC members to add items send them to the Secretary. Rose is not an EC member, and has no standing. Afterwards the agenda is approved at the beginning of the meeting. It can be objected to or amended by those with those privileges.
13:20 –
The LPF, my county affiliate, and many others designate the Chair as official spokesman. Otherwise you could have mixed messages from the party. Thus they can remove or post content, and direct press releases.
Rose has been upset the Chair will not give him admin status to freely post on the page. His anger boiled over recently when he staged a protest in front of the private business of a Republican Senator who voted for gun control. I attended myself and stood in the rain to support his effort. I have dubbed Gainesville “The Berkley of Florida”. It is my only “blue” county of the 9 I represent, and dark blue.
I have often promoted marketing the parts of libertarian ideals most relevant to the local area, and avoiding things that would create a backlash.
The decision to not use the official party page to promote an event the affiliate had no part in was tactically sound and perfectly reasonable. Rose did not even make his own event page, and attendance was low. One of many times he wanted to force others to do things for him he could easily do himself. The same Chair removed content I posted there, as is his right, before I completely surrendered admin status once they were solidly off the ground. I never mentioned it, it was his right.
Rose wants to force him to create a committee so he can be on it and use the party page as his personal one.
He is fairly charismatic. He should have just made his own page like I did. I have more followers on Libertarian Heathen than my party page. America is still personality driven in regards to politics. Rather than force a Constitutional crisis, a small affiliate should just remove mandatory committee requirements. There may be other solutions, but to show up with no standing and claim the affiliate is illegitimate is not one of them.
26:05 –
This motion is a result of an offhand comment made months ago, about promoting the T-shirts of a branded LPF candidate over a non-partisan campaign t-shirt that was not allowed to say libertarian on it. Perfectly sensible, nobody banned anyone’s t-shirts. Rose wants to force them to table his Soil and Water Conservation District campaign shirts essentially. Rather than ask, he wants to force it with a poorly written motion.
29:57 –
The affiliate business meeting is not the place to raise campaign funds. I do agree in general that we should not meet in government buildings. The Chair explains his reasons, and that is up to the affiliate. His attempt to play gotcha backfires with hilarity.
“Less than a month ago, it increased by a thousand.”

The day after the meeting the Alachua affiliate Secretary contacted us for help with parliamentary procedure in case they ever had to use it again, and I provided advice on fixing some of the issues with the Constitution. They were being proactive to address the legitimate portions of his concerns.

The next day I received a series of texts from Chris Rose, which he followed by seceding from his own affiliate via the message at the end, earning himself the title “Chris Rose, Douchebag”. 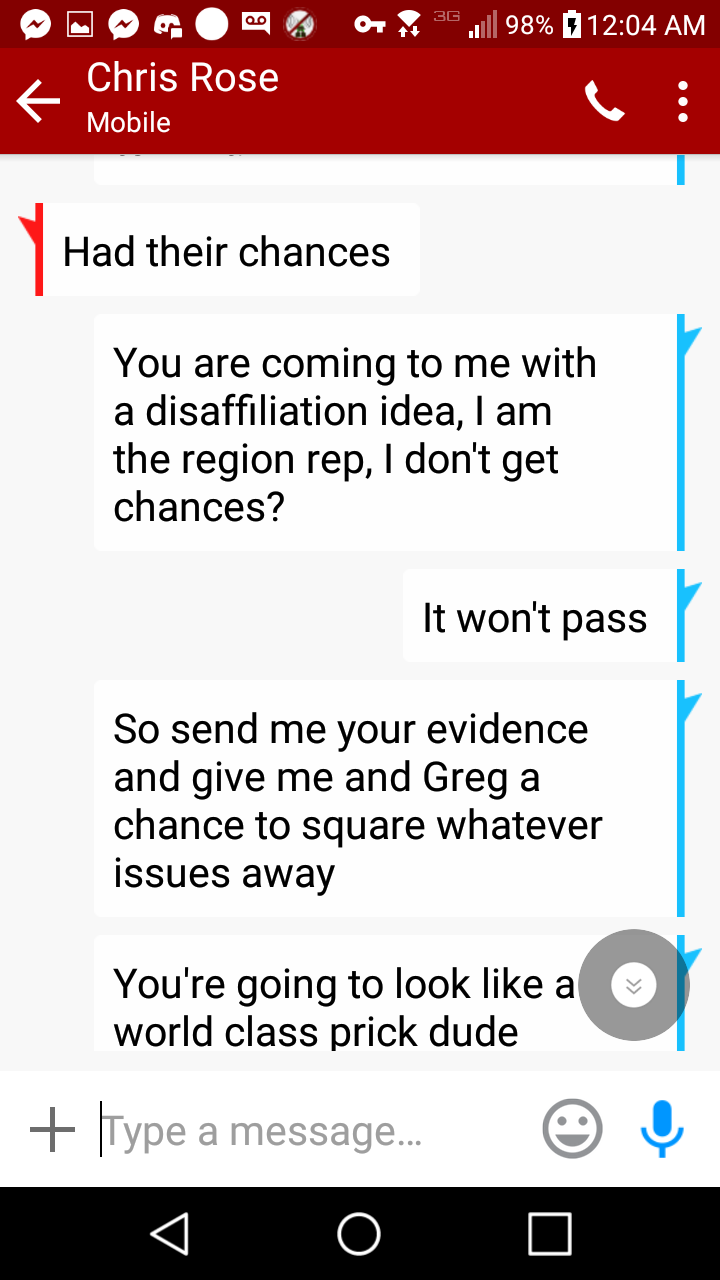 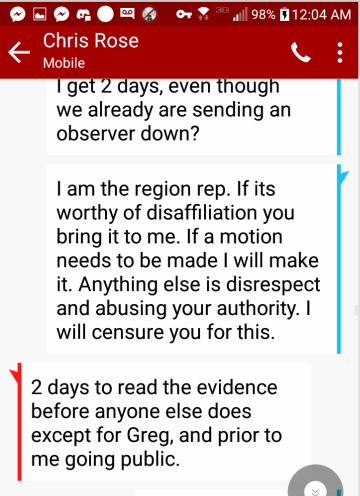 2 thoughts on “Chris Rose Secedes From His Own Affiliate”