The arguments for gun control do not stand up in the face of scrutiny. Furthermore, the groups behind the push to ban firearms are not teenage victims, but Marxist Astroturf.

Today, the UK press reported the murder rate in London has surpassed that of New York city, adding a punctuation mark to the failure of England’s gun control policy. Removing firearms from civilians in the UK was a response to a school shooting, the tragedy in Dunblane, Scotland, where the death toll, like Parkland Fl, was also 17. Unfortunately, the years since have seen an epidemic of crime and violence that has swept over the entire country. We would do well to consider the dangers of taking similar measures in the US.

The effect of banning firearms in the UK has been exponential violent crime increase. Mass killings continue, with the criminals and terrorists using bombs or even knives, which were wielded by Islamists on the defenseless crowd at the London Bridge attack after they ran over pedestrians in a rented truck. Gun crime initially fell, but is back on the rise.

Officials in the UK are now discussing “knife control”, undeterred by the failure of gun control. I suppose the British will go back to tearing their meat off the bone with their teeth after the next round of safety legislation. It seems a bit absurd even for the left, considering prison inmates still manage to procure knives.

It is also worth noting these crime increases are in a time when London is blanketed in cameras just like any cell block, which is obviously not controlling anyone but the law abiding. The fact that vehicles are registered and insured did not seem to be a factor in deterring the attack either, although the emotional nature of the gun control argument makes facts rather irrelevant. George Orwell was right, 1984 was just about ten years off as far as the estimate.

Estimates of violent crime show the UK is now anywhere from 2-8 times as high as the United States, depending on the estimate. I will use the lower end of the estimates for argument’s sake, as the case is still made quite well with even the lowest estimates which show about 2x the rate. The graph below is from a while ago, but Europe has not ever had concealed carry like we do, and the links above show US crime lower, and European crime higher in the time since.

The trouble with removing citizen carry of firearms, is that a group of just a few men can form a gang and terrorize anyone they want. Now, entire areas of London are no-go zones for the English. Muslim street patrols terrorize women not wearing hijab’s or men with alcohol, and basically attack anyone who does not conform to their version of Sharia law. The same phenomena is also appearing in Sweden, Belgium, and other countries populated by disarmed subjects.

The emboldened Islamic Theocrats have now imposed their own law on the area, in the form of Sharia Courts. The government fears of riots if they do not recognize the courts, and the increasingly large voter pool of the massive numbers of government sponsored refugees, has made the Crown and Parliament impotent to stop it.  A literal example of disarmed nation being taken over without a shot fired is happening right before our eyes. A few days ago a crowd of 80 Lebanese, Turks, and Kurds brawled with machetes in the streets of Germany. I am not so sure replacing shootings with giant machete brawls is the best solution.

There are no statistics to tell the tale of the effect of nipping some of this in the bud, with a .35c bullet by a concealed carrier into the first aggressive member of a Sharia patrol. One has to wonder about the effect of some patriotic Britons on rooftops during the riots with AR-15’s and AK-47’s, like the Korean store owners during the Los Angeles riots. There is polling to indicate that day to day life and encounters with crime for a disarmed subject in the UK is becoming far worse than life in the US.

The promoters of gun control in the US will also bemoan the epidemic of gun violence. Nothing could be further from the truth, as the graph below shows.

The proliferation of firearms after the 2004 expiration of the Clinton era “Assault Weapons” ban, has shown continued reductions in violent crime. This proves the trends in the 90’s of lowering crime were unrelated to banning assault weapons. 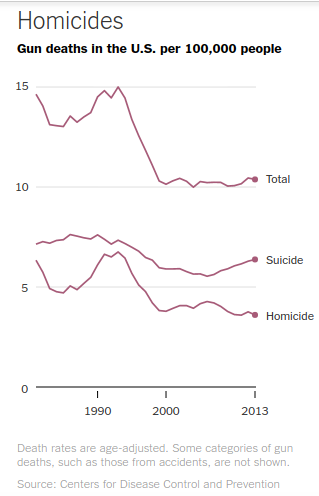 Furthermore, the statistics used for US gun deaths are skewed, as the majority of gun deaths are suicides. Sweden, Japan, Belgium, and many other countries with more suicides have heavy gun control. The US is tied with Uganda for 48th in suicide rates. Guns may be easier and more certain tools to use, but banning them doesn’t stop suicide, and if you do not want to live on earth any longer, we should not use that decision as part of the argument to take natural rights away from the living.

Who is REALLY behind this gun control movement?

The facts have been proven that gun control does not stop mass attacks or suicides, and that the policies increase crime. The movement for gun control that followed the Parkland shooting in Florida is one of the most glaring examples of “Astroturf” in history. The term was first coined by U.S. Senator Lloyd Bentsen of Texas in 1985. It is when companies or even individuals mask their motives by putting it under the guise of a grassroots movement. A great “TED Talk” on the subject can be found HERE.

March For Our Lives is one of the most detestable examples of Astroturf ever seen in American politics. David Hogg and Emma Gonzalez are the main puppets for those behind the movement. David Hogg initially lied, and later admitted, that he was not even at the school the day the shooting happened. Emma Gonzalez has admitted to ostracizing the shooter and defended the conduct stating “you didn’t know this kid”. In light of their role as leading marionettes in the crusade against the rights of their fellow Americans, the lies and lack of human decency are not surprising.

But who is pulling the strings of these puppets? If you have ever actually organized an event, you know that a massive amount of coordination goes into a nationwide walkout, and these huge rallies. The easiest way to find out who is behind an Astroturf movement is to follow the money. March For Our Lives, however, incorporated as a “dark money” entity, so they do not have to disclose their donors.

That is really all you need to know to determine that March For Our Lives is Astroturf for a special interest. The lack of history education among them makes it pretty obvious they arent creating dark money non-profits. This is definitely not the work of a few kids. Hogg, Gonzalez, and the other Parkland students are merely human shields the real movement organizers hide behind. The Marxist gun grabbers waited like wolves for the blood of the sheep to make their move.

The usual suspects from the left are to be found once a little digging is done. Leaked audio placed the Giffords foundation in a starring role. In a moment of extreme irony, Planned Parenthood leadership is also involved, I guess killing kids is only OK in their taxpayer funded clinics.

A slew of other well-funded leftist groups including Everytown for Gun Safety, Moms Demand Action for Gun Sense in America, and MoveOn are all working behind the scenes at March for Our Lives, BuzzFeed reports.

Irony is found in the fact George Soros money funds many groups supporting the movement. Soros is a literal Nazi who bragged that confiscating the property of Jews during WW-2 was one of the best times of his life. Perhaps this explains the outrageous co-option of the “Never Again” slogan from the Jewish community, and the flippant reaction from Hogg and others when it was pointed out.

The recent walkouts at schools around the US were not student led, but orchestrated by the teacher’s unions. The American Federation of Teachers, one of America’s largest teacher’s unions, is backing March For Our Lives. When the teachers leave the class, the students must also leave. Schools around the US forced kids to choose sitting in the gymnasium or quads, or leaving, and you know which option most took.

The reality is that there is no epidemic of gun violence, and we are the safest as we have been in decades.

The truth is that if this movement is successful we will all face dramatic increases in violence, and possible national ruin as we are seeing in the UK.

This is a disgusting display of exploiting tragedy for political ends that we should all repudiate.

It is classic Astroturf, and they are so arrogant they are not even concerned we know it.

There is a Parkland survivor who is an ACTUAL grassroots activist, named Kyle Kashuv. I will leave a video of his work in closing.