Infanticide is never libertarian. The foundation of liberty is respect for life. If you support this Communist eugenics plan, you are the enemy of freedom and supporter of murder.

93% of abortions are for convenience, most are funded by money extorted from taxpayers.

64% of women are pressured/forced into abortions.

Abortion on demand is a eugenics program, it is murder for social and political goals, making it one of the most clear cut violations of the Non-Aggression Principle in our society.

Abortion is often just the destruction of evidence for child rape and incest.

The mother and child are 2 different humans. We have a standard for life whereby if someone has a heartbeat or brain activity they cannot be killed without due process. A hospital patient can be determined unable to recover and removed from life support. As such, a baby with deformities that will result in them being unable to live and grow into a healthy adult may be aborted after such determination has been made.

A baby that threatens the life of the mother may also be aborted. This is a simple self defense argument.

A baby that does not fit either criteria is deserving of the same rights as any other human. This is one of the simplest ethical questions to solve.

A baby does not just appear in a woman. There is a free will choice by an adult to engage in sex. In the case of rape, we have Plan-B. That argument is dead. Consent to sex is consent to pregnancy and once that decision is made you cannot murder a person because you changed your mind. Murder is murder.

This is the simple explanation of why abortion on demand is not a libertarian position.

Here is detailed information on the horrific procedure that blights our nation.

This is what remains of a baby destroyed by a suction aspiration abortion. Suction aspiration, or “vacuum curettage,” is the abortion technique used in most first trimester abortions. A powerful suction tube with a sharp cutting edge is inserted into the womb through the dilated cervix. The suction dismembers the body of the developing baby and tears the placenta from the wall of the uterus, sucking blood, amniotic fluid, placental tissue, and fetal parts into a collection bottle.

In this technique, the cervix is dilated or stretched to permit the insertion of a loop shaped steel knife. The body of the baby is cut into pieces and removed and the placenta is scraped off the uterine wall. Blood loss from D & C, or “mechanical” curettage is greater than for suction aspiration, as is the likelihood of uterine perforation and infection.

Used to abort unborn children as old as 24 weeks, this method is similar to the D&C. The difference is that forceps with sharp metal jaws are used to grasp parts of the developing baby, which are then twisted and torn away. This continues until the child’s entire body is removed from the womb. Because the baby’s skull has often hardened to bone by this time, the skull must sometimes be compressed or crushed to facilitate removal. If not carefully removed, sharp edges of the bones may cause cervical laceration. Bleeding from the procedure may be profuse.

Otherwise known as a “hypertonic saline” abortion, this technique is used after 16 weeks of pregnancy, when enough fluid has accumulated in the amniotic fluid sac surrounding the baby.

A needle is inserted through the mother’s abdomen and 50-250 ml (as much as a cup) of amniotic fluid is withdrawn and replaced with a solution of concentrated salt. The baby breathes in, swallowing the salt, and is poisoned. The chemical solution also causes painful burning and deterioration of the baby’s skin. Usually, after about an hour, the child dies. The mother goes into labor about 33 to 35 hours after instillation and delivers a dead, burned, and shriveled baby. About 97% of mothers deliver their dead babies within 72 hours.

This is the abortion method that failed to kill Gianna Jessen but left her with cerebral palsy.Listen as she tells her own powerful story.

Prostaglandins are naturally produced chemical compounds which normally assist in the birthing process. The injection of concentrations of artificial prostaglandins prematurely into the amniotic sac induces violent labor and the birth of a child usually too young to survive. Often salt or another toxin is first injected to ensure that the baby will be delivered dead, since some babies have survived the trauma of a prostaglandin birth and been born alive. This method is used during the second trimester.

Similar to the Caesarean Section, this method is generally used if chemical methods such as salt poisoning or prostaglandins fail. Incisions are made in the abdomen and uterus and the baby, placenta, and amniotic sac are removed. Babies are sometimes born alive during this procedure, raising questions as to how and when these infants are killed and by whom.

This method offers the highest risk to the health of the mother, because the potential for rupture during subsequent pregnancies is appreciable. In the first two years of legal abortion in New York State, the death rate from hysterotomy was 271.2 deaths per 100,000 cases.

All of the above images are used with permission from J.C. Willke, M.D., Life Issues Institute, and Hayes Publishing Co., Cincinnati, OH. 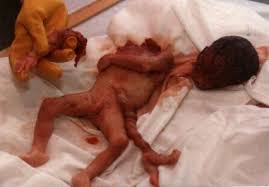 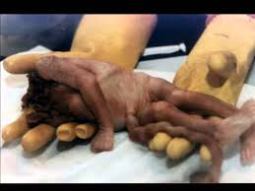