On January 22, Rev. Rawls, “The Grinch Who Tried To Steal History”, descended on St. Augustine Florida with a busload of unruly Marxist agitators to support cultural genocide of the southern people and the monuments to their dead. The American Guard were there to oppose the “hate bus”, and enjoyed a decisive victory.

I arrived near sunset to meet up with Florida American Guard Sgt. At Arms Todd Gomez, and Guardsman Ryan Hansen. We joined a crowd that included 3%ers, the local Tea Party, Libertarian Party of Florida activists, members of the Sons of Confederate Veterans, and local unaffiliated patriots.

The crowd was in good spirits and the City Council of the nations oldest city, established in 1565, refused to bend to the will of Soro’s useful idiots. They came on a bus, and were likely paid to cause the ruckus they created. Leading the Marxist camp was a a deluded huckster known as Rev. Rawls. One attendee made an amazing sign in his honor, SAA Gomez called it an “analog meme”, creating a wave of laughter. 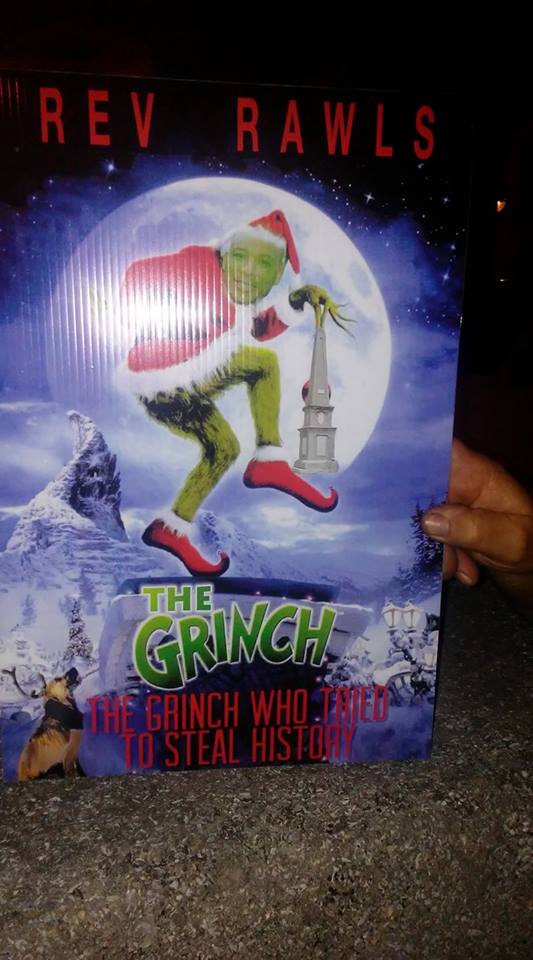 We met the local Tea Party who were very keen to discuss politics. They had won a lawsuit against local Republicans who tried to co-opt their group and make it a Neo-Conservative RINO operation. They were very libertarian in their views, and expressed interest in attending future events and meetings. We later walked the streets from City Hall to the Confederate Veteran’s Memorial, while they carried their flags and used a megaphone to taunt the local Communists.

Rawls, also known as the “Gainseville Gangster”, vowed unrest and disruptions in coming weeks, unhappy with the 5-0 vote to keep the monument but add a sign near it to provide context. At tonight’s meeting a panel of academics was chosen to create the language. The local Tea Party chair noted they were liberal professors from nearby Flagler College, who may be biased in the same news reports containing Rawl’s threats of unrest. He tried to claim racial slurs were used to feed the hateful narrative he is pushing, but to their credit, local press noted it was not true. I did a live-stream and interviewed some of those defending our heritage, as well as walked over to hear Rawls complain about white people. We then walked to the monuments, and through the ancient streets full of ghosts. Finally we walked around the Castillo San Marcos, the fort built in the 1500’s, and discussed the rich legacy all these historical sites mean, capturing it on video.

We stopped for some photos with a couple monuments of particular interest, General William Loring, which was one of two targets for cultural genocide, and Pedro Menendez De Avilez, founder of the city.

William Loring was a warrior’s warrior. Born in South Carolina, he moved to St. Augustine Florida at the age of 4. By 14 he joined the Florida Militia, and fought bravely in the Seminole wars. He heard about the Texan’s struggle for independence and ran away at the age of 17 to fight for their cause. His father brought him back to Florida, where he immediately went back with the militia
and fought in the second Seminole war.

He then attended Georgetown University, was admitted to the Florida Bar, and served in the Florida House of Representatives from 1843-45. In 1846 war broke out with Mexico.

He was promoted to Major. His arm was shattered by rifle fire in battle and was amputated, in his 3rd wound suffered in combat in that war.

In 1849, Loring was ordered to take command of the Oregon Territory and led a train of 600 mule teams 2,500 miles from Missouri to Oregon. He was in command of the Oregon Territory for two years and was then transferred to being commander of the forts of the frontier, such forts as Fort Ewell, Fort McIntosh, and Fort Union. During some five years he engaged in many skirmishes with the Indians, most notably with the Comanches, Apaches, and Kiowas. Loring was promoted to colonel at the age of 38 in December 1856, the youngest in the army.

When the war of Northern Aggression broke out, he declared:

“The South is my home, and I am going to throw up my commission and shall join the Southern Army, and each of you can do as you think best.”

He resigned from the U.S. Army on May 13, 1861. Upon offering his services to the Confederacy, Loring was promptly commissioned a brigadier general and given command of the Army of the Northwest, participating in Robert E. Lee’s Western Virginia Campaign in the fall of 1861. His first assignment was to defend western Virginia from Maj. Gen. George B. McClellan, who was invading from Ohio. He soon acquired the nickname, “Old Blizzards” for his battle cry, “Give them blizzards, boys! Give them blizzards!”

During the Vicksburg Campaign, he was cut off from the rest of the army at the Battle of Champion Hill. He then marched down to join forces with Gen. Joseph E. Johnston and was under the command of Johnston and Lt. Gen. Leonidas Polk, respectively. Loring took over command of Polk’s corps temporarily when Polk was killed at Pine Mountain on June 14, 1864, and was replaced on July 7, 1864 by Lt. Gen. Alexander P. Stewart. After being wounded at Ezra Church on July 28, 1864, Loring was out of action until after the fall of Atlanta. Upon returning he fought at Franklin on November 30, 1864, Nashville in mid-December, and in the Carolinas in March 1865.

After the war, he joined about 50 Confederates who served in the army of Egypt, serving for 9 years. He was actually recommended to them by his former adversary General Sherman.

After his return to the United States, he wrote a book about his Egyptian experiences, entitled A Confederate Soldier in Egypt (1884).

He returned to Florida and lost an election for US Senate. He died while in New York, and was buried in St. Augustine. Some of his ashes lie beneath this monument.

Should we allow someone like George Soros and his rabble come and remove this monument? Will we allow this warrior’s name to be flushed down the memory hole?

Over our dead bodies. 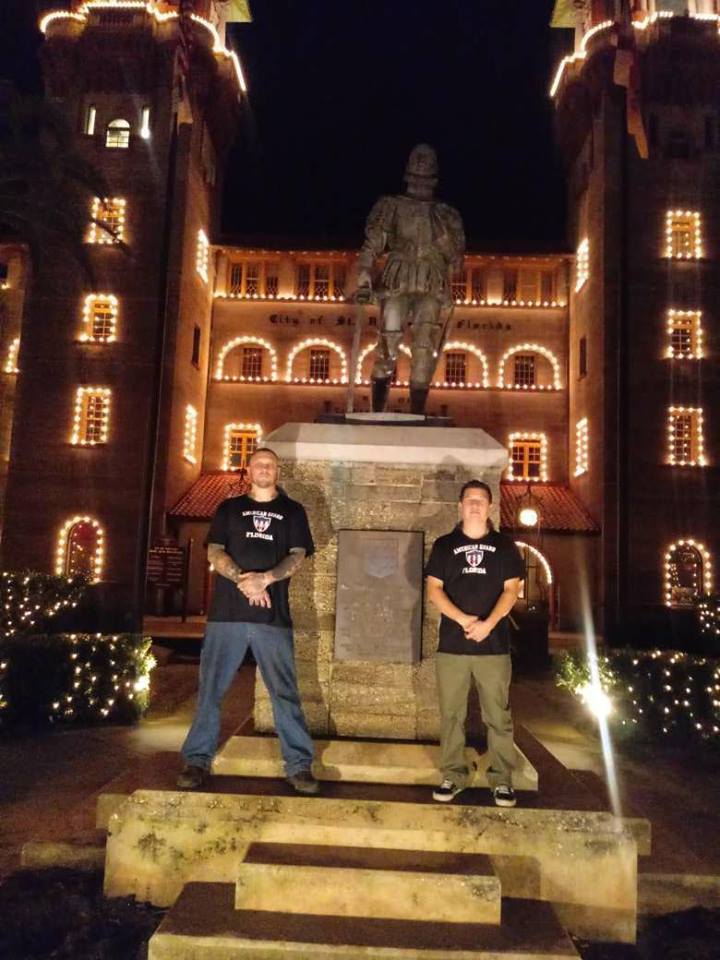 His statue, is about 150 yards from the Confederate Veteran’s Memorial that George Soros wanted to tear down.

If we did not save Johnny Reb, the Revolutionary War heroes would have been next. General Avilez soon after.

The United States is a place rich in history. This land of milk and honey has seen many flags fly over her and many triumphs as well as tragedy.

We embrace the memory of them all.

We learn the lessons of history so we do not repeat the failures.

In this manner we honor our ancestors and build a future based on their legacy.

Those who wish to destroy that legacy we count as our enemy.

Those who wish to learn its lessons, and build a future on this foundation of personal freedom and economic liberty, we count among our allies.

Those who forget the lessons of history are doomed to repeat it.

Those who learn will lead us to a bright future.

They are the men and women of the American Guard.

On the World War Two Memorial, a starke reminder of the cost of freedom, where I noticed the name of a man from my Clan, Albert Ramsey, KIA.

He was one of many Ramsey’s that fought and died for the sacred principles enshrined in the Bill of Rights, since William Ramsay Signed the Declaration of Arbroath in 1320. This was the first expression in mankind’s history of “Popular Soverignty”, or the right of men to chose their own leaders. It was also the first time men expressed the right to form nations by consent, the first expression of the Nationalism that forms the bedrock of liberty.

David Ramsay was held for a year as a POW, right here in St. Augustine, by the British during the Revolutionary War.

We are more than mere economic units. The spirits of my ancestors are all around me as I continue their struggle in my own generation.

The battle will continue until we crush the left wing, their bureaucrats in the halls of power, and their rabble in the streets. The American Guard will be on the front lines to take our place in history. Contact your local chapter and ride into legend with us.