Answering Apartheid With Communism And Genocide

In South Africa, there are now official calls for the seizure of white farms. Epidemic assault, arson, and murder against white farmers, are now encouraged by the party Mandela founded, the ANC.

While many of us wish that Donald Trump did not know where Aleppo is at this point, you cannot claim to be in the liberty business while ignoring the carnage in South Africa.

It is being actively suppressed by the mainstream controlled media, and one of the most shocking human rights travesties on Earth today.

The ANC is now openly advocating the worst fears of the South African people, the seizure of their land and their final extermination at the hands of Mandela’s devotees.

Christian missionary Charl van Wyk saw the hate directed against the Christian Afrikaners with his own eyes in 1993 when terrorists burst into St. James Church and killed 11 people. Van Wyk opened fire with his own sidearm, startling the terrorists who expected nothing but unarmed victims, and causing them to flee.

He recounted his experiences in “Shooting Back: The Right and Duty of Self-Defense.” The situation parallels the fall of Rhodesia, now called Zimbabwe. It was also taken over by a psychopath who exploited racial tensions to seize power, Mandela’s friend and fellow Marxist, Robert Mugabe.

Mugabe has a head start on Mandela’s ANC in South Africa. The results of the growing Marxist power in Africa show a dark future as South Africa is poised to go down the same path as Zimbabwe.

Rhodesia was once known as the “breadbasket of Africa“, and used to export wheat, corn, and tobacco across the continent and beyond. By 1975, the UN Agricultural Year Book ranked Zimbabwe second in the world for yields of maize, wheat, soya and groundnuts, and third for cotton.

In a combined ranking of these crops, it was first in the world. The country’s tobacco was rated the best in the world in both yield and quality. Rhodesian beef was second to none in the markets of Europe.

The main culprit for the fall of Rhodesia was race based land seizures for the purposes of wealth re-distribution, accomplished with a vengeful spirit against the white minority populace who were the primary agricultural class.

The equality sold by Mugabe, Mandela, Nujoma, and others came to Zimbabwe first, and now the state owns 90% of the land. South Africa is next.

Next came the land seizures, when race based policy aimed at white farmers seized the land without compensation. One such seizure was immortalized in the award-winning film “Mugabe and the White African“.

The powerful documentary depicts Michael Campbell and his large group of black employees standing against violent attacks on the farm, as he sues Mugabe in international court in an effort to save it.

In March of this year, President Zuma called on parliament to change South Africa’s constitution to allow the expropriation of white owned land without compensation.

He called on the coalition of left-wing parties to unite and amend the constitution to disenfranchise the country’s white minority.

He furthermore encouraged farm attacks and illegal seizures in the speech, saying “Where you see a beautiful land, take it, it belongs to you”, a harrowing view into the ultimate end of the left’s entitlement mentality.

Mandela’s ANC has already instituted more race based laws and regulations than existed under apartheid, driving minority white South Africans out of the economy and forcing many into squalid squatter camps, and the same international groups that once criticized the government Mandela deposed, now warn of the coming genocide there.

Mandela was a hard line Communist, but after his term the ANC made overtures toward pro-business elements, leading to cries of treason by the masses, inflamed with ideologies of class and race war.

In 2013 former African National Congress Youth League President, Julius Malema started a party called the EFF, which now holds 1/3 of the seats in both houses of parliament. Communists seem to have an endless well of irony, from which they draw their group names. The EFF stands for “Economic Freedom Fighters”. 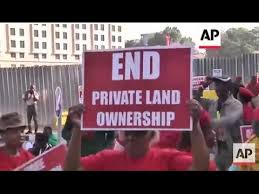 Nelson and Winnie Mandela popularized a song during their violent uprising, called”Ayasab’ amagwala” (The cowards are scared).

It features a chorus of “Kill the Boer”. Boer is the Afrikaans term for farmer, but also refers to any Afrikaans-speaking white person.

Mandela is on video, continuing to sing it after his release from prison on terrorism charges in 1990, shortly before his election as the President of South Africa in 1994.

Him and his supporters used to sing it as they “necklaced” white Afrikaaners and anti-Communist political enemies, leading to his 27 year incarceration.

His wife Winnie Mandela continued to promote the practice during his confinement, by many accounts exceeding his brutality. The song enjoyed a resurgence as Mandela’s ANC pushed forward with its race laws and persecution of the minority whites of the country.

The South Gauteng High Court ruled on 26 March 2010 that the song (which Malema had continued singing at public gatherings), was “unconstitutional and unlawful”, and that any person singing it could face charges of incitement to murder, stating that the song called for the killing of the “farmer/white man”; however the ANC defended the song and announced it would appeal the ruling.

In April of 2011, Julius Malema, Winnie Mandela, and other leftists in South Africa were brought up on charges for continuing to incite murder against the white farmers by continuing to sing the song during public rallies.

He was convicted in September of 2011, the same month Forbes named him among the “10 Youngest Power Men in Africa”.

Writing in the Sowetan, Andile Mngxitama described Malema as “an opportunist who raised these issues [nationalisation, land reform etc], not to solve them, but to trick the poor who have been waiting for a better life for all for almost 20 years now under your party’s rule … Instead of leading the new struggle as a selfless leader of the poor, you only pay lip service to the plight of our people while you amass great amounts of wealth through your political influence.”

This illustrates one of the biggest issues in the Libertarian Party. We must learn that not everyone who claims to be for human rights has a noble interest.

We must excise disingenuous leftist elements from the party that seek only to exploit race, and other civil rights issues, for Cultural Marxist ends. The cost to America of ignoring this imperative was the subject of the last volume of this article series, and if we look to Africa we see the end game.

“With our boxes of matches and our necklaces we shall liberate this country.” – Winnie Mandela

We are watching South Africa fall right before our eyes. There is a general media blackout regarding it all – the victims screams fall on as deaf an ear in the international media, as they they do across the empty savannah.

Life expectancy the day Apartheid ended was 64, on par with Russia. Today it has fallen to that of Somalia, 56.

The Communists never go short of food and medicine, only the people. Mugabe, in his 90’s, may live to see equality come to South Africa, and its life expectancy sink to the mid-thirties, like Zimbabwe’s.

There are 132.4 rapes per 100,000 people per year, which is by far the highest in the world: Botswana is in second with 93, Sweden in third with 64, due to its large scale Muslim immigration policies; no other country exceeds 32. Bloomberg’s “Misery Index” for 2017 has South Africa in the #2 slot, just behind Venezuela, which is in full economic meltdown, also due to Marxist policies and another corrupt charlatan who rose to power with the siren song of “equality”.

Making matters worse, the ANC succeeded in passing strict gun control before they instituted the anti-white race laws, and also outlawed collective self defense groups organized by the farmers known as “commandos”, who would help fend off large attacks.

Self defense is always the first sacrifice, and brings forth the bloodshed and tyranny. The disarmed people of South Africa watch their land stolen, and their monuments destroyed, just as in New Orleans.

Could Communism be so bad, that the black populace would begin to wax nostalgic for the Apartheid system?

In 2002, polling indicated 60 percent of South Africans felt the country was better run under Apartheid, with both blacks and whites rating the current government less trustworthy, more corrupt, less able to enforce the law and less able to deliver government services than its white predecessor.

The rise in pro-apartheid sentiments among blacks could reflect both the growing income inequalities within South Africa’s black community – where many have actually grown poorer since the end of apartheid – as well as difficulties in dealing with government bureaucracy.

Despite promises of political and social equality made by the Marxist terror leaders like Mandela, the aim was always trading one Oligarch for another, and if the new boss flies a red flag, you can be sure that death, poverty, and corruption will always make a meteoric rise.

This is an opportunity for Libertarians to showcase the horrors of collectivism, and to speak out on behalf of a race being systematically abused and openly discriminated against by one of the most brutal political movements ever to curse the Earth.

A political party that celebrates them and quotes their founder is devoid of any ability to claim the role as the torchbearer of liberty. Mandela’s name should be reviled among all free men.

I call on Libertarians around the world to stand with South African victims of discrimination based on their race. We must shine a light on the coming genocide and try to stop the modern Hitlers in Africa, like Mugabe, Mandela’s ANC led by Zuma, and the EFF and its brutal and corrupt leader, Julius Malema.

As a Libertarian I would like to offer South Africa an alternative to Apartheid or Communism.

Let us condemn the Marxist madman, Nelson Mandela, and his devotees, and replace “Kill the Boer” with “Liberty or Death”.

3 thoughts on “Uncivil Rights, Vol 3 – The Cost of A Red South Africa”